– Czech car manufacturer official main sponsor of the tournament since 1993

– Company is again the exclusive partner of the 2022 IIHF App 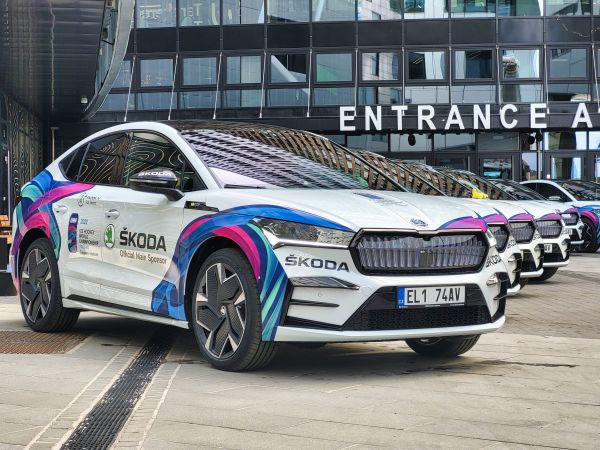 In 2017, the Czech car manufacturer’s commitment was recognised as the Guinness World Record for the longest main sponsorship in the history of world sports championships. This year, the tournament will take place in the Finnish cities of Helsinki and Tampere from 13 to 29 May. ŠKODA AUTO is providing the organisers with a fleet of 45 vehicles, including the all-electric ENYAQ COUPÉ RS iV, ENYAQ iV, SUPERB iV and KODIAQ models.

Martin Jahn, ŠKODA AUTO Board Member for Sales and Marketing, emphasises: “Ice hockey is one of the most popular sports not only in ŠKODA AUTO’s home country but also in the Baltic States and Scandinavia, where ŠKODA is also very successful and has a large customer base.

The sport and the brand are a perfect match. That’s why I’m delighted we’re supporting the Ice Hockey World Championship, the most important international event in this sport, as a sponsorship partner – and have been doing so for three decades. For this special occasion, we’re providing the organisers with a state-of-the-art fleet of vehicles, including our highly emotive and fully electric ENYAQ COUPÉ RS iV. I wish all the competitors every success and, of course, I’m keeping my fingers crossed for the Czech national team, especially.”

Luc Tardif, IIHF president, adds: “The 30-year partnership between ŠKODA AUTO and the World Championship represents such a long and strong commitment that the brand has become almost synonymous with ice hockey. ŠKODA has always been a reliable partner to us, sharing not only the same values but also a passion for the game. I think very few hockey fans today (myself included) could imagine a rink without the traditional logo in the centre or ŠKODA cars in the arena as well as on the host city’s roads.”

ŠKODA AUTO first supported the IIHF Ice Hockey World Championship in 1992, initially as a mobility partner. The following year, the manufacturer became the official main sponsor of the tournament – and continues to be to this day. ŠKODA AUTO’s commitment was recognised in 2017 when it received a Guinness World Record for the longest main sponsorship of a world sports championship.

This year, the Finnish cities of Helsinki and Tampere will be hosting this highlight in the ice hockey calendar. For the 85th IIHF Men’s Ice Hockey World Championship, the 16 best national teams in the world will be playing for the title from 13 to 29 May – and once again in front of a crowd. Due to the COVID-19 pandemic, the 2020 World Championship was suspended, and last year, it took place without fans in the arenas. In keeping with long-standing tradition, the ŠKODA logo will once again feature in the centre circle during matches, as well as on the perimeter boards and other locations around the arenas.

ŠKODA AUTO will also have a strong presence on the streets of the host cities: As the tournament’s official mobility partner, the car manufacturer is again providing the organisers of the IIHF Ice Hockey World Championship with a shuttle fleet. 45 vehicles, one-third of which will be ENYAQ COUPÉ RS iVs, will be responsible for transportation between the venues.

Visitors to the event can also see the all-electric model in the two fan zones of Tampere and Helsinki. Vehicles of the ENYAQ iV, SUPERB iV and KODIAQ model series will also be on the roads. They all feature the logos of ŠKODA AUTO – the official main sponsor – and the 2022 Ice Hockey World Championship. 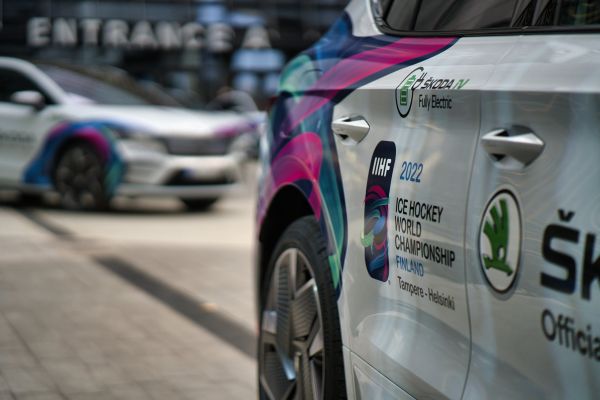 ŠKODA AUTO is again the exclusive partner of the 2022 IIHF App, which offers ice hockey fans exciting background information and interesting statistics. Thanks to the live ticker with goal alert, fans will never miss a goal and can follow the action virtually in real-time.

The betting game allows fans to predict the outcome of the games and share their predictions with friends. The Android and iOS app is also available in several languages.


Luke Aikins and Andy Farrington will take to the skies above Arizona to attempt their world-first Plane Swap, and the anticipation is building. On April 24, the skydivers hope to go down in history as the first pilots to take off in one aircraft and land in more >>


The highly talented and popular USA Polo team, has won the World Cup. It is a mammoth win for the team and the country and reflects its never-say-die spirit. “We are delighted to win the World Cup in the sport of Polo,” says Tareq Salahi, more >>


Bosch to drive the Around eMTB Race 2022


Next June 31st, Oliva will host one of the Wingfoil Junior World Championship events VIDEO


the best opportunity to watch the Wing more >>


Dr. Raffaele Chiulli re-elected as President of ARISF – with video


On 15 December 2021, the global sports community came together for the ARISF General Assembly to reflect on the united front of sport in the face of this past year’s challenges and voted on the election of the ARISF President and Council for the period of 2021-2025.


2021 Formosa Xtreme Triathlon: 26 Runners Conquer One Of The Toughest Triathlons In the World – with video


…Reaching 3417 Meters HighRegarded as one of the most difficult triathlons in the world, Formosa Xtreme Triathlon, also known as FXT successfully took place on November 26th, 2021 in Taiwan with 54 participants with 26 that would be the warriors reaching the top, at 3417 meters high.
more >>


The first edition of Sardegna Tries X ends in resounding success. The three-day event opened on Saturday, October 30th with the Regional Aquathlon Championship, continued on Sunday, October 31 with the International Triathlon Cross Country race and concluded with the technical and scenic Trail Running race on Monday, November 1st. more >>


In the portuguese island of Madeira, where the mountain sometimes kisses the clear blue sea, an island with whispering waterfalls, trails, pathways and almost 1500 km of levadas (irrigation channels), a cultural heritage built with the Herculean effort of successive generations who never resigned themselves to embrace the word insulation, an island where there is still a preserved endemic more >>


Mountain bikers race from sunrise to sunset in Cappadocia landscape


Riccardo Spanu and Maria Elena Mura are the star performers of the first day of competitions at Sardegna Tries X, the three-day outdoor sport event that opened today, Saturday 30 October, with the Sardinian Aquathlon Championships, a discipline that includes a 1 km swimming fraction and a 5 km running fraction.

A new documentary on Red Bull TV shines a light on the world’s best women MTB freeriders and how they are taking the sport to new levels on two wheels down the steep lines, multiple drops and gap jumps of the Red Bull Formation slopes in Utah. more >>


Porsche gets involved in kitesurfing


A breath of fresh air with sponsoring partnershipsIn addition to its long-standing sponsorship of tennis and golf, Porsche is to support the further development of kitesurfing. From November, the sports car manufacturer will sponsor the Red Bull King of the Ai more >>


Trailblazing athletes discuss how to use your passion for positive change


Canadian holds off compatriot Sorge with Boggs third down steep Utah course. Brandon Semenuk made Red Bull Rampage history on Friday when he edged out three-time champion Kurt Sorge to claim his fourth title and become the first to win back-to-back Rampages, more >>


Frenchman Axel Mazella clinched victory at the third stop of the KiteFoil World Series in tricky offshore breezes that faded towards the close of the regatta’s dramatic final fourth day in Cagliari on the Italian resort island of Sardinia. more >>


By the time Britain’s Connor Bainbridge dons his competition shirt on the final day of racing at the KiteFoil World Series Cagliari, he will have had the dubious honour of having worn all three of the leaders’ coloured jerseys, such is the intensity of the battles on the water.VIDEO: Sardinia Grand Slam IKA KiteFoil World Series – Day 3 more >>


22nd Edition of the Pannonian Challenge in Croatia -with video


The long-awaited 22nd edition of the Pannonian Challenge took place in Osijek, Croatia from the 11th of August to the 15th of August. This festival of extreme sports and urban culture has become one of the most important sporting events not only in Croatia, but in the whole region, thanks to its audience and fans. VIDEO: Pannonian Challenge 2021 – Doc more >>


Vali Höll and Loïc Bruni held their nerve at the final UCI Mountain Bike World Cup downhill event of the season at Snowshoe to win their races and claim thrilling 2021 overall titles. Here is all you need to know:- Austrian teenager H& more >>


Successful young racers fuelled by Olympic dreams shocked by tough transition to elite levelThe ranks of elite kiteboard racers at the KiteFoil World Series Traunsee in Austria have been swollen by aspiring young athletes who have already tasted success. more >>


The KiteFoil World Series Traunsee, the tour’s second stop, being fought out on a breathtaking mountain lake in Austria, has won the backing of key sponsors eager to deploy the top-level event to project the region on the world stage. more >>


The opening round of the KiteFoil World Series Traunsee stop got off to a dramatic, if stutter more >>


The fastest kite racers in the world are ready for four days of intense race action at the UPPER AUSTRIA KiteFoil Grand Prix Traunsee which is hosting the highly-anticipated second stop of the KiteFoil World Series. more >>


Hawaiian surfer triumphs at Trestles to add to Tokyo gold Carissa Moore, 29, has made 2021 a year to remember by winning the inaugural Rip Curl WSL Finals at Lower Trestles in California, USA, to seal her fifth WSL world title. Here is all you need more >>


Incredible performances at the KAT100 Miles – with video highlights


Yesterday, Friday at 20:11, after 26:11:15 hours, Stefan Schaffer from Austria arrived at the finish line at the village square in Fieberbrunn as the overjoyed winner of the KAT100 Miles over 173 kilometers and 9,996 meters of altitude. There was also a jubilant mood at the Kids Trail at the village center of Fieberbrunn. more >>


Perfect start to the KAT100 Miles in PillerseeTal with video


On Thursday at 6 p.m. the starting signal was given for the KAT100 Miles, the longest Ultratrail in Austria, in Fieberbrunn. VIDEO HERE more >>


On the penultimate day of Vertical Blue 2021, Alexey Molchanov did it again. That is, he singlehandedly nabbed his third world record of the competition with a constant weight bi-fins dive to 118m in a dive time of four minutes and 38 seconds.
more >>


The return of the European Trophy on Saturday, July 31 marks the international comeback of the much-loved Trophy format after a one-year absence. The competition sees the best athletes in Europe in the Trophy for more >>


On July 18th, 2021 Alice Modolo of France had a life-changing dive. On the 5th day of the world renowned Vertical Blue freediving competition Alice Modolo became the first French woman to ever set a world record in the sport of apnea. Modolo’s 95m dive took three minutes and 12 seconds in the discipline of constant weight bi-fins. more >>


On the 4th day of the Vertical Blue 2021 freediving competition the last dive of the second session put an exclamation point on the fact that Alessia Zecchini of Italy was not only going to win the entire event but that she was unstoppable as she achieved her third world record in nearly as many days. The indomitable Italian siren, Alessia Zecchini, made her 101 FIM world record dive look more >>