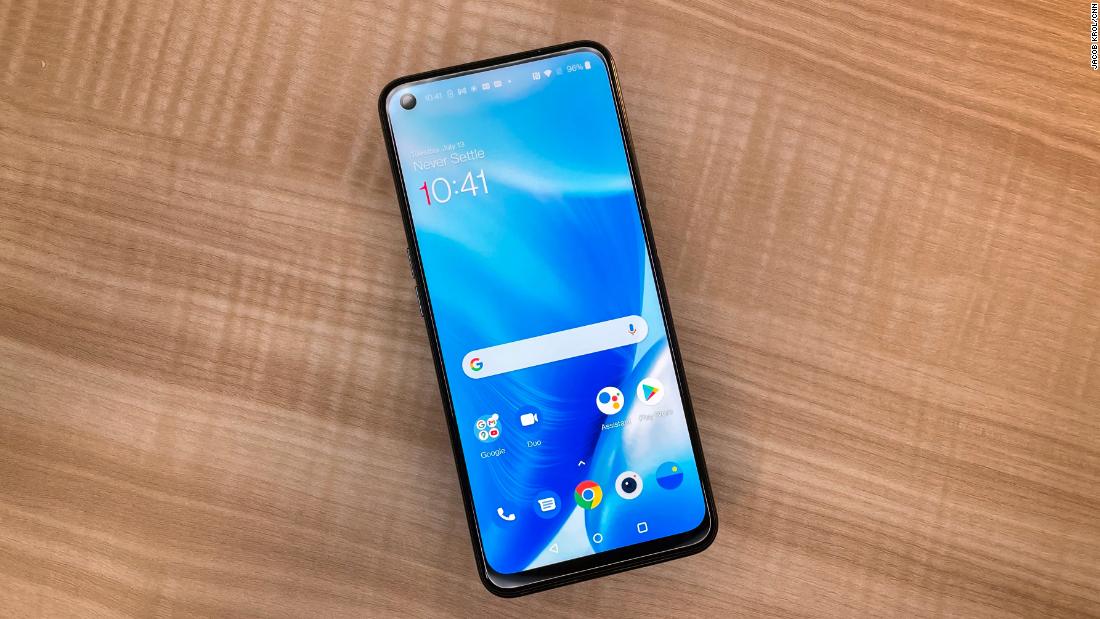 The budget phone space feels like an ever-expanding market — the iPhone SE delivered a new level of value in early 2020, with options from Samsung, TCL and Google also dropping innovative phones at affordable price points.

Who this is for: The OnePlus Nord N200 5G is a good choice for a T-Mobile user who wants to take advantage of 5G, cares more about screen quality than image quality and uses a phone for basic tasks. But aside from current T-Mobile users, the Nord N200’s average performance across the board won’t appeal to many.

What you need to know: For under $250, the N200 doesn’t have class-leading support in any way. It’s a modest phone with a set of cameras that can sometimes leave you frustrated and performance that can at times slow down.

How it compares: The N200 succeeds as a budget smartphone with a terrific 6.49-inch HD display with a 90 Hz screen. The Snapdragon 480 processor is plenty for everyday tasks, productivity and even multitasking. More advanced functions like gaming or creative apps will cause some slowdowns. OnePlus delivered a usable 16-megapixel front-facing camera, but the rear three lenses offered middling performance. You’ll get usable photos in daylight, but images shot in low light or at night feature a lot of noise and some artifacts. Those looking for an excellent shooter will be better served elsewhere with a device like the Galaxy A32, Pixel 4a (or 4a 5G), TCL 10 Pro or Galaxy A42.

Budget phones can sometimes mean compromising the build, but that isn’t the case with the OnePlus Nord N200 5G. Yes, it’s a plastic build, but you likely wouldn’t notice that from first looks or feel. The design builds on this main layer with smooth and sleek finishes.

The Blue Quantum finish appears as a frosted and smooth back with a lighter, almost ice white gradient on the rear top that flows into a deep navy. There’s a silver OnePlus logo that adds flair and a camera bump in the top left corner. The bottom features a USB-C port and somehow — against all odds — a headphone jack.

The front is crowned by a 6.49-inch nearly edge-to-edge display. It’s not an OLED, but that’s not necessarily a problem. It’s a Full HD+ LCD, which means that it’s pretty sharp and can get considerably bright. It displayed colors fairly accurately, and while it lacked some level of detail compared to an OLED screen or an AMOLED, it’s pretty nice. The 90 Hz refresh rate — how many times per second the screen can refresh itself — is higher than the standard 60 Hz that the iPhones and many other devices still use. This, in turn, makes film and video look more lifelike, and even scrolling through a timeline feels more smooth.

OnePlus has packed a 5,000mAh battery inside, which delivers days of standby and easily lasts a full day — even with the screen on close to full brightness. It’s pretty remarkable at this price point. The phone charges with the USB-C standard and, with a high enough wattage brick, you’ll be able to fast charge or you can toss it onto a Qi-enabled wireless charging pad.

As usual from OnePlus, the N200 is an Android smartphone running a customized user interface. In this case, it’s Android 11 with OxygenOS — the same experience as on the OnePlus 9 or 9 Pro — though the N200 is powered by a Qualcomm Snapdragon 480 chip with 4GB of RAM versus the 9’s Snapdragon 888 with 8GB or 12GB of RAM.

The N200 is passable to get you through basic tasks. Watching a movie, scrolling through Twitter, filming and editing a TikTok and most productivity apps happen with ease. More intense applications, like creative ones or popular gaming titles like Real Racing, will slow down the experience. The latter will also occur when you’re multitasking between heavy apps. The N200 can’t match the iPhone SE or even an upper midrange device like the Pixel 4a 5G. For most tasks and core uses for a phone, you’ll be just fine with this offering from OnePlus.

And if you’re on T-Mobile, this device will fully support the Sub-6 GHz 5G network. It’s not the super-fast speeds we saw on AT&T’s or Verizon’s mmWave 5G network, but these are dependent speeds that in our testing give you more bandwidth — in turn, it’s better connectivity when you’re in a crowded space with many 5G devices trying to get online. You’ll only get 5G support if you’re a T-Mobile customer; those on AT&T and Verizon are stuck on 4G.

The cameras on the OnePlus Nord N200 5G are ultimately a mixed bag. The front-facing 16-megapixel lens is housed in the top left corner of the screen in a pinhole notch. It’s passable for Snapchats and video calls, but images captured end up looking pretty unnatural. In our tests, pictures are overly bright, leading to a mix-up with some colors. Zooming in will also result in losing details. Thanks to some OnePlus customizations, it will auto smooth your skin and skew the colors a bit.

Plus: These are the best smartphones of 2021.

The primary lens on the back is 13 megapixels. When getting ready to snap a shot, it rendered pretty quickly in a live view and was quick to refocus on an area (either through a tap or just auto). We noticed some skewed areas and an awful amount of brightness — both of these occurred more in darker lighting shots or with a lot in frame.

Most daylight shots came out usable, but taking a photo in lower lighting conditions or at night did not yield the best results. We found them to contain a hefty amount of noise, skewed colors and even some artifacts. We’ll also note that the front-facing camera on paper is a better lens than the main one on the back — 16 megapixels versus 13 megapixels.

The remaining 2-megapixel depth and 2-megapixel macro lens don’t accomplish a whole lot here. One aims to aid in shots with a bokeh effect (akin to Portrait Mode on the iPhone), but they don’t shine here. As we said on previous devices that opt for depth or a macro lens, they don’t do a tremendous amount. We’d rather have seen a telephoto (which would pack more details over the macro lens) or a wide angle, which lets you get more in the shot.

The N200 5G is all about value and for a specific type of consumer, there is a lot to be found. If you’re on T-Mobile, this phone takes advantage of 5G, features an excellent screen and packs a giant battery.

Samsung has a range of A-Series smartphones with similar features and better cameras on paper; we’ll be testing the Galaxy A32 5G and A42 shortly. If you can save up a bit more, you’ll be better served by a Pixel 4a or Pixel 4a 5G. And if you’re not sold on the Android ecosystem, the $399 iPhone SE continues to outpace affordable Android devices, thanks to the A13 chip inside.