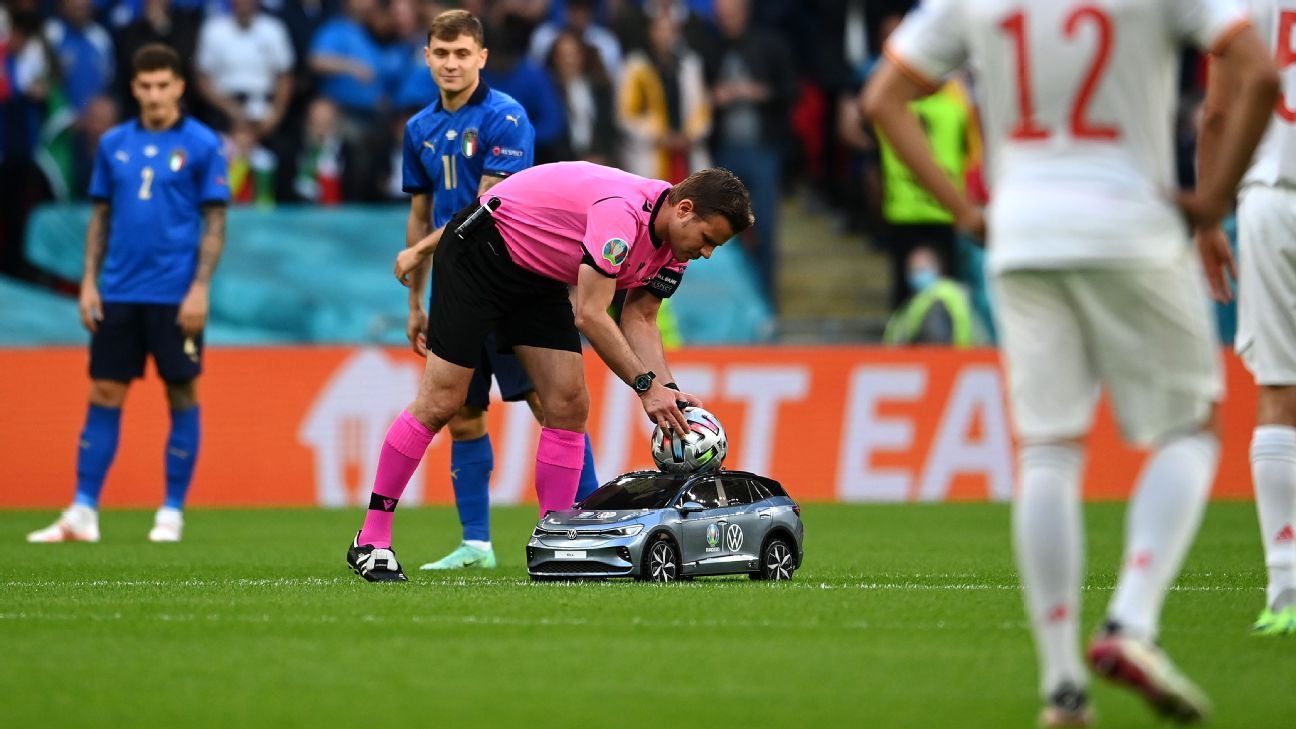 Italy’s dramatic win over Spain in Tuesday’s Euro 2020 semifinal at Wembley may have featured another great goal from Federico Chiesa and further proof of Pedri’s emerging talent, but they were both upstaged by the real breakout star on the tournament.

Never mind Chiesa’s fine strike, Alvaro Morata’s equaliser or Jorginho’s ice-cool nerves to win the penalty shootout — the real highlight came before the game had even kicked off.

That’s because the London crowd was treated to the return to action of the tiny car which brought the ball out on to the pitch.

The remote-controlled vehicle, a 1:5 scale model of a Volkswagen SUV, first won our hearts when it was deployed to deliver the match ball to the centre spot at the opening game of the tournament last month — which, coincidentally, also featured Italy as they hosted Turkey in Rome.

I taught Ronaldo how to run like that! #GERPOR #EURO2020 pic.twitter.com/XZTrcdDsj5

It was such an instant viral hit that the National League introduced its own version ahead of the playoff final on June 20, though the results weren’t quite as spectacular.

It even spawned a copycat at the cricket, when broadcaster Greg James sent an even tinier version of the tiny car on to the field at Lord’s.

I was inspired by the little car at the Euros. I think @jimmy9 was impressed…

Since then, the car has gained a cult following on social media and, despite not being seen again after the opening match until Tuesday’s first semifinal, it has still become a memorable part of the Euro 2020 experience.

The sight of the miniature VW scooting out across the turf and carrying the Adidas Uniforia Finale match ball to referee Felix Brych before the Italy-Spain match was enough to send fans into raptures.

The car is back everyone!!! #EURO2020 pic.twitter.com/wiD1JCbHhd

Over the moon to see the tiny car back. A long drive from the opening game in Rome. A wonderful moment for football.

Can’t believe we got to see the tiny car again pic.twitter.com/ynmFwqamj8

On its way to meet the ref in the centre circle, the car also came up close and personal with Nicolo Barella while the Italy midfielder warmed up.

Some pointed out that the tiny car had successfully managed to outlast and outperform many of the heavyweights after making it through to the final four unscathed.

This little car made it further in the #EURO2020 than France, Germany, and Portugal #ITAESP pic.twitter.com/8TXFQsSfE4

And some even began plotting new ways in which the tiny car could feature more during games.

Rather than penalties, which are just upsetting, if a game ends 0-0 after 90 minutes each side should get a little car and they should have to race them from one goal to the other. #ITAESP pic.twitter.com/A0LD1PQdsj

The tiny car should take all of the penalties

And yes, before you ask, the tiny car has been bestowed with the “Cheap Panini sticker” treatment — a true testament to its profound influence on the game.

As one of UEFA’s “Official Match Ball Carriers” for Euro 2020, it’s only fitting that the tiny car has its own official Twitter account, through which it provides regular personal updates of its activities.

What you saw How I felt pic.twitter.com/KwUwWkaLfn